What's the next best thing to a real Viking Boat Race? Have a boat race on land using hula hoops! The children worked together in teams to compete in a Viking boat race. They learned how important it was for rowers of a ship to work together and constantly communicate. Similarly, the children had to use the same skills to navigate their 'boats', working together, as it wasn't the fastest team that won the race but the team that communicated the best!

The children are going to write their own newspaper article about a very exciting event that happened in school on Wednesday. There was video evidence which captured a dragon flying in the school grounds. The children then discovered that the peace garden was littered with evidence. As detectives, they investigated the evidence they found and they are going to use this to write a report next week. 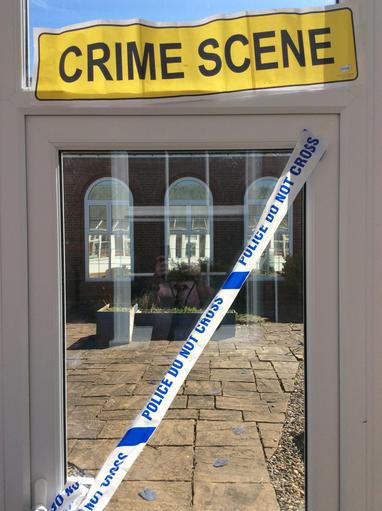 What's to come in the Summer Term

As part of Science Week, the children enjoyed doing a practical science investigation every day this week. Our Science topic is 'states of matter', so the children learned all about gases, solids and liquids and how different types of matter can be changed. Here are some pictures of the best bits of the week!

The children had a fantastic time dressed up as their favourite book characters! They did lots of activities based on How To Train Your Dragon. The entire class looked brilliant!

Dressed Up For World Book Day

Activities in the Snow

Make the most of the snow and try some of these fun activities:

Kye made this amazing gecko during Construction Club. He was so proud of himself. Take a good look at his wonderful creation! 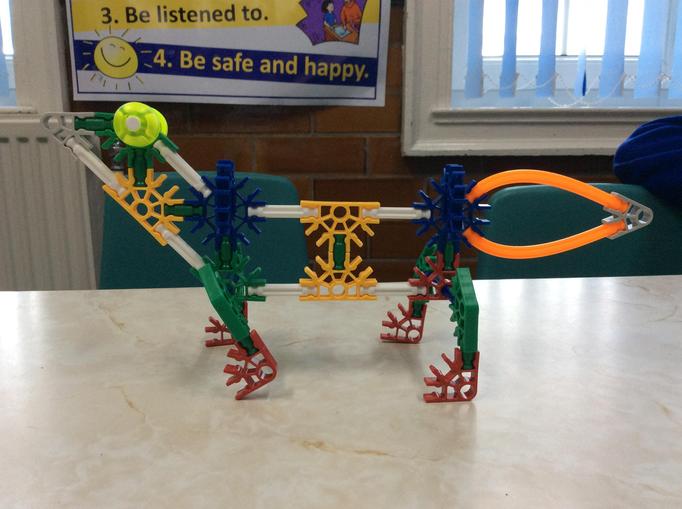 A visit from Jet

Following a visit from Jet, a police dog from Durham Police, the children learned the importance of saying "No" to strangers. PC Kerr, Jet's handler, came in to school to talk to the children about STRANGERS and how DANGEROUS some STRANGERS can be.

The children wanted to make their own posters and information leaflets, some of which I have posted on the site, to share what they learned.

Say No To Strangers

This term the Key Task is to host a Viking Boat Race. This will be a very interesting and exciting Topic which I am sure the children will love! 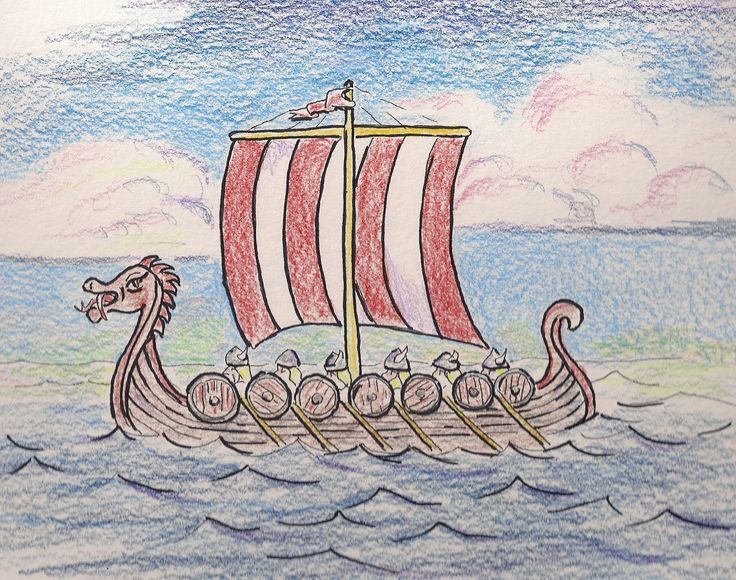 Due to the school closure yesterday we have had to postpone the Survival Workshop. The workshop will be going ahead so the children will not miss out on the excellent experience. Once the date has been confirmed the school we will let you know!

Overview of the Term Ahead 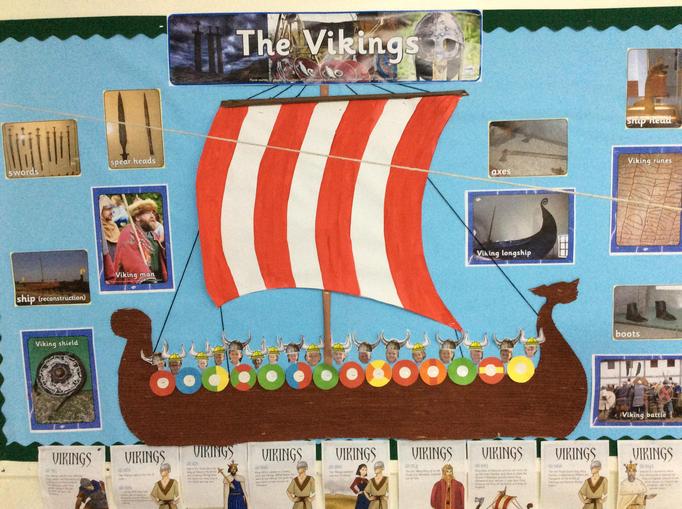 The children had a brilliant time at the Christmas Party. There were games galore! The children played Christmas Pinata, Stack the Boxes, Pin the tail on Rudolph and many more! They ate party food and each child received a very special delivery from Santa Clause!

The children have been very creative in the build up to Children in Need. As a class they designed and created a wonderful Children In Need T-shirt for me to wear. I will be extremely proud to wear the T-shirt designed by 4C!

A huge well done to all of the children who performed brilliantly during the assembly yesterday. I was very proud of every single child in the class. They all spoke very clearly and handled the mature theme of the assembly exceptionally well. Thank you again to everyone who came to support the children.

As you may know 4C will host their first class assembly on Thursday 9th November (9:10am-9:30am). This week we have been busy researching, preparing and practising our parts for the assembly. We have also been preparing props and pictures that we will share with you next week. The children are nervous but excited to share everything they have learned.

Pottery first appeared in the Neolithic (or late Stone Age) at the same time people started farming. As part of our Stone Age Topic the children learned why it was important for the Stone Age people to make and use pottery.

On Thursday the children were very excited to take part in a Judo session. They learned lots about the martial art of Judo, such as the importance of balance, strength and speed. They also learned some basic Judo moves to take down an opponent. Most of all, the children had tremendous fun; every single member of the class left the hall with a smile on their face!

In order to write a newspaper report on the Iron Man, the children wrote their own interview questions and answers for the Iron Man so they could act in role with a partner and interview each other. The children focused on some key interviewing skills; eye contact, tone of voice and body language. They did a great job!

As part of National Poetry Day the children learned about the features of Acrostic Poems. They planned and wrote their own acrostic poems about the Iron Man. They did a brilliant job using similes, alliteration and other features.

As part of our Science topic on Sound, the children learned that sounds are vibrations that can travel through different materials. The pitch of a sound is how high or low the sound is. The loudness of a sound is how loud or soft it is. The children experimented with musical instruments to work out the pitch and loudness. 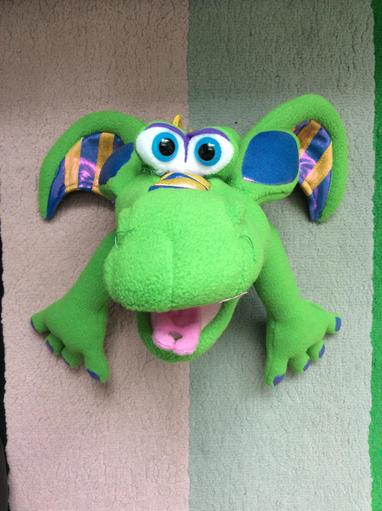 This is 4C's Mascot, Sparky the Magnificent Dragon. Children who try their best and behave sensibly have the chance of becoming the Star of the Day. Every day the class vote for a Star and the chosen child will keep Sparky on their desk. At the end of each week a Star of the Week will be chosen and they will get to take Sparky and his diary home to record their adventures together.

Who will be chosen next? 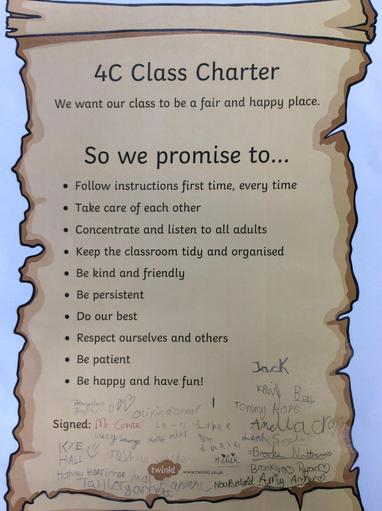 As part of our Topic subject The Stone Age, the children have been given a key task that will challenge them to learn as much as they can about how early humans survived in order to successfully complete it.

The key task is to:

It is very pleasing that many of the children are taking their reading book home and reading at least three times. I very much appreciate you taking the time to read with your child and making a short comment in their Reading Diary.

A reminder that on Fridays, the children have PE and swimming. 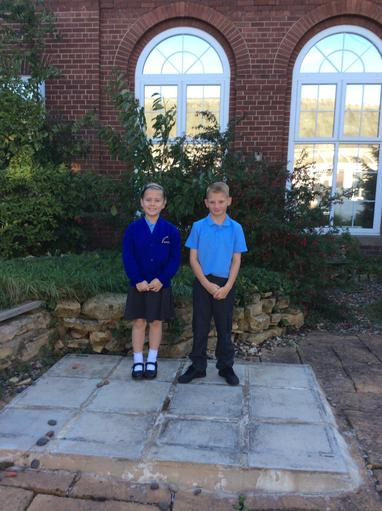 The children have written a statement of intent: 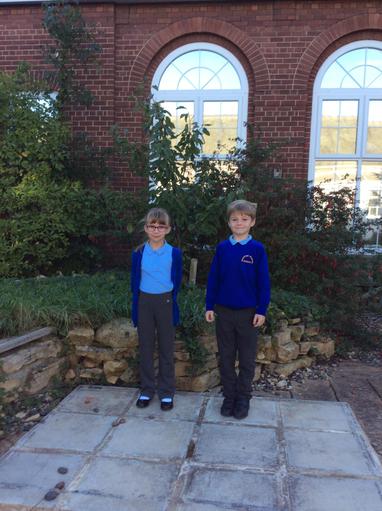 The children have written a statement of intent:

Joshua: “As an Eco-Warrior I want to get rid of any thorn bushes and nettles around school so that children will be safer. I will make sure that the lights will be switched off in the classroom if no-one is using it.”